“The Selective Service enables our Nation to respond effectively to military manpower needs, should it be called upon to do so.”

“Having served in the US Navy, I appreciate and respect the sacrifices and commitment that young people who serve are making for our country. The Selective Service enables our Nation to respond effectively to military manpower needs, should it be called upon to do so. It is an honor and privilege to continue to serve as Rhode Island State Director and support this mission by ensuring that those eligible, ages, 18-25, across the Ocean State are aware of the federal law and register with the Selective Service System,” Commander Fahy said.

Commander Fahy, a Naval Academy Graduate and Associate Director of the Ocean Exploration Cooperative Institute at the University of Rhode Island, served 20 years in the Navy as a professional engineer; Navy Diving Officer; and Seabee Combat Warfare Officer. He commanded two deployed detachments of Seabee divers throughout the Pacific in support of Navy waterfront construction missions. Commander Fahy is a decorated veteran with multiple Meritorious Service Medals; Joint, Army and Navy Commendation Medals; and various other service awards.

COL Kenney said, “Commander Fahy is a decorated veteran who served his country with honor and distinction in the U.S. Navy for 20 years. His military record is impressive with two combat tours and numerous contributions in the field of ocean and civil engineering that include leading the construction of a state-of-the-art Naval Hospital in Guam and numerous other construction projects to support Naval operations around the globe. He is a true leader who we are fortunate to have as a teammate at the Selective Service System. He’s the right person for the job and will lead our efforts in Rhode Island to ensure all young men are registering with the Selective Service.” 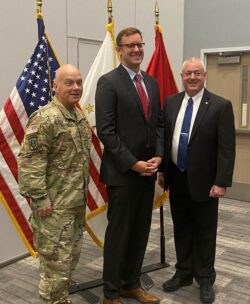