“It is an honor and privilege to serve as Maine State Director and help ensure that young men, statewide, are aware of the federal law and register with the Selective Service System…”

“It is an honor and privilege to serve as Maine State Director and help ensure that young men, statewide, are aware of the federal law and register with the Selective Service System. By doing so, these young men are demonstrating their patriotism and willingness to answer the call to service in the event of a crisis,” BG Drummond said. “The Selective Service does important work in support of the Department of Defense’s mission, and I am proud to be part of it,” BG Drummond further stated.

In addition to his position as Maine State Director, BG Drummond is the Executive Director for the National Guard Bureau Facilities and Engineering Advisory Committee and works as a codes and ordinance consultant for the Town of China, ME.

COL Kenney said, “General Drummond, who has given decades of service to his country in the U.S. Army and the Maine Army National Guard, is an incredible person and true leader who we are fortunate to have as a teammate at the Selective Service System. He’s someone who will help carry our work forward so that we can fulfill the mission entrusted to us by the President and Congress.”

BG Drummond served over 36 years in the Army, National Guard, and Maine Army National Guard, commanding at the company, battalion, and brigade levels. He is an Iraqi Freedom Veteran and previously served as Director of Facilities and Engineering for the State of Maine and the Maine Army National Guard. He graduated from the University of Maine and went on to earn his master’s degree at Thomas College in Waterville, ME. BG Drummond is an Army War College graduate and longtime, active member of the American Legion. He resides in China, ME with his wife, Brenda. They have two grown children, Chase and Kiley. 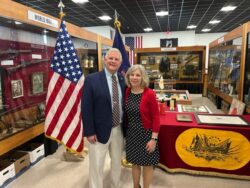