Due to the COVID-19 outbreak, the SSS has been placed in telework status. The call center is available with delays. The processing of mail and requests for a Status Information Letter have resumed, however, please expect delays. Online Registration and Verification are available 24/7. View our news section for more information.

Message from the Director: Honoring Veterans Across America

Message from the Director: Honoring Veterans Across America 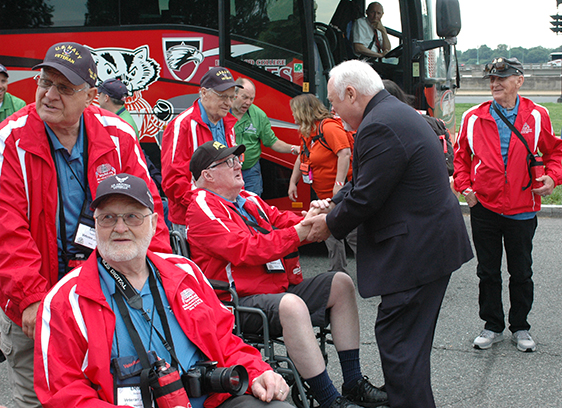 Each year on November 11th we recognize Veterans Day to honor all the men and women who’ve served our country in uniform. We honor and celebrate veterans from generations past and present. It’s a time for reflection and recognition of all those who have served and sacrificed. Many, many patriots have given their lives so we may continue to enjoy freedom and prosperity and a homeland where we are free to worship any religion or none at all! On Memorial Day all Americans unite in solemn recognition of the liberties that have been earned by the efforts and sacrifices of others.

This day was originally conceived as Armistice Day in 1926, in recognition of the ending of Word War I. Soon that changed. If the idealistic hope had been realized that World War I was “the War to end all wars,” November 11th might still be called Armistice Day. But only a few years after the holiday was proclaimed, World War II broke out in Europe. More than 16 million Americans took part and 407,000 died in service. Following the end of World War II, Armistice Day was changed and Congress passed the bill which President Eisenhower signed proclaiming November 11th as Veterans Day.

The national commemoration of Veterans Day continues today. Parades and ceremonies echo all throughout the country in communities large and small. They are but a small sign of our solidarity and commitment to honor those who have served and those who have paid the ultimate sacrifice. This will be the first year in many I have not marched with the Boy Scouts in my hometown’s Veterans Day parade to honor our veterans. I may miss the parade, but I will never forget the veterans who have made all those parades possible throughout the years!

I ask each of you to enjoy your day off and hopefully you will celebrate with family and friends. I also ask you to take a moment (or longer) to remember the reason for the day off. Our veterans and their personal sacrifices for you! Take just a moment and salute the Flag, those broad stripes and bright stars representing freedom and liberty around the globe backed by the finest fighting men and women on the planet. Take a moment and reflect upon all that has been bestowed upon all of us as a result of those years of sacrifices from 1776 to 2017. Once you take a few moments to truly reflect on all we enjoy as a result of all those sacrifices, you may even be compelled to drop to your knees in appreciation of the American veterans.

God Bless all veterans and their families!