Due to the COVID-19 outbreak, the SSS has been placed in telework status. Please note that we are experiencing longer wait times with the Call Center and mail processing. Online Registration and Verification are available 24/7. View our news section for more information. 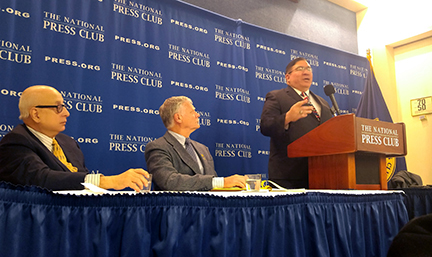 Romo opened his remarks highlighting the role Selective Service plays in the U.S. national security arena, its significance as a backup for the all-volunteer Armed Forces, the registration requirement for immigrants, board member opportunities, and the possibility of registering women in any future draft now that combat is gender neutral. The Director told the audience that an immigrant man (documented or undocumented) living in the United States, age 18 through 25, is required to register. Registration is not only the law; it helps keep immigrants eligible for federal student financial aid, government jobs, and job training programs. Failing to register for immigrants may delay them from obtaining U.S. citizenship.

Ms. Laura Chavez, a Selective Service employee and a Marine Corps veteran who attended the National Press Club event, noted that she came to the United States from Bolivia when she was four years old. She says that joining the military helped her obtain her citizenship much faster than it normally takes. Ms. Chavez explained that she was in the Marines for only three months and her citizenship was being processed.

On the topic of registering women, Romo said, “. . .while the Secretary of Defense has recently opened up all military combat jobs to qualified women, there has been no change in the Military Selective Service Act to require them to register, or be subject to a future military draft. Selective Service continues to register only men, ages 18 through 25.”

“It is important to note that women have proudly and honorably served in our volunteer force and have increased their presence from about 3 percent of the military volunteers during the Vietnam era to approximately 15 percent today. Women have shown great capabilities in all aspects of our military and can now serve in all positions they are qualified for.”

Director Romo and Associate Director for Public and Intergovernmental Affairs Richard Flahavan did not depart until all questions were answered from the standing-room-only audience.