Due to the COVID-19 outbreak, the SSS has been placed in telework status. The call center is available with delays. There will also be delays processing mail. Online Registration and Verification are available 24/7. View our news section for more information. 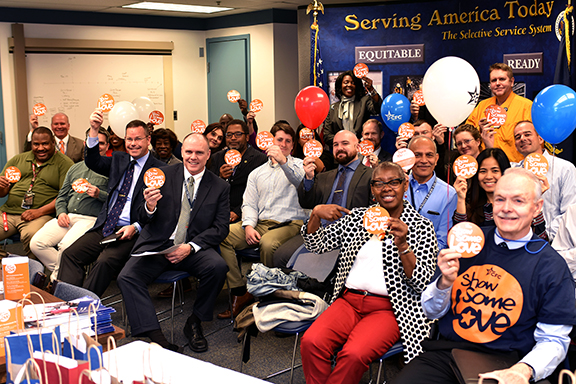 The 2017 Combined Federal Campaign’s (CFC’s) theme, “Show Some Love,” is a unified theme kicking off the season of workplace giving. Selective Service National Headquarters’ employees gathered on November 20, to show some support to the agency’s participation in this successful nation-wide campaign. Last year Selective Service exceeded its goal by 40 percent. We are aiming to beat the goal of 100 percent again this year.

Director Don Benton is the agency’s CFC Chairperson and Ms. Vernetta Fields, Human Resources Officer, volunteered to be the Co-Chair. Mr. Benton shared with Selective Service employees, “This agency won every award possible last year with the stellar performance that was turned in by all of you. It was incredible!”

With thousands of participating charities, the CFC includes a myriad of causes to represent the diverse interests of Federal employees. “Through the campaign, Federal employees can support charities helping communities affected by natural disasters, like the recent Hurricanes Harvey, Irma and Maria, the earthquake in Mexico, and the California wildfires, as well as those that support veterans, cancer research, animal rescue, clean water, and many other worthy causes,” said Vince Micone, Chairperson of the Local Federal Coordinating Committee that oversees the Combined Federal Campaign of the National Capital Area (CFCNA).

Because of the generosity of our employees and the efforts of the agency key workers, many lives have been changed for the better. Thank you!