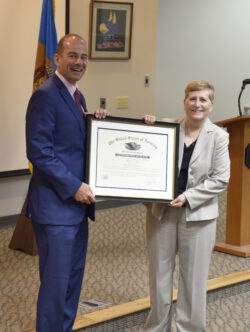 “With more than three decades of service with the Delaware Army National Guard, Ruth has the experience necessary to carry out the duties of the Delaware State Director for the U.S. Selective Service System,” said Governor Carney. “I was pleased to nominate Ruth, and that she will be the first woman to lead this post. Thank you to Acting Director Brown for appointing Ruth as State Director, and we look forward to our continued partnership.”

“We are extremely pleased with the Governor’s nomination of Ruth to serve as the Delaware State Director and look forward to working together,” said Acting Director Brown. “Her experience will help ensure that Delaware maintains its high registration rate.”

General Irwin received a master’s degree in Strategic Studies from the U.S. Army War College and earned two additional master’s degrees from the University of Kentucky in Library and Information Sciences; and Wilmington University in Human Resources Management. General Irwin worked at Alliant Tech Systems (ATK) until 2005 when she transitioned from the Manager of Industrial Security and Human Resource Supervisor to the full-time Commander of the 31st Weapons of Mass Destruction – Civil Support Team, Delaware Army National Guard. Irwin’s military career has spanned more than 30 years with the Delaware Army National Guard, including a year in Afghanistan. General Irwin retired in 2012 from the Delaware National Guard as the Director of Operations and Training.

“I am truly honored to be the first woman to serve as Delaware’s State Director for the Selective Service System,” Irwin said. “I’d also like ‘the First State’ to become number one in registration, local board membership and readiness programs. The Agency’s readiness mission serves an important role in our national defense and registration is a key step for all men – especially should they one day seek federal benefits, such as employment or student aid.”