Due to scheduled server maintenance, online registration and verification will be temporarily unavailable on Saturday, April 4th from 9:00 AM EST to 5:00 PM EST.

If Congress and the President were to reinstate a military draft, the Selective Service System would conduct a National Draft Lottery to determine the order in which young men would be drafted.

The lottery would establish the priority of call based on the birth dates of registrants. The first men drafted would be those turning age 20 during the calendar year of the lottery. For example, if a draft were held in 2020, those men born in 2000 would be considered first. Men turning 21 in the year of the draft would be second priority, men turning 22 would be third, and so on until a man turns 26, at which time he is over the age of liability. Younger men would not be called in that year until men in the 20-25 age group are called.

Because of the enormous impact of this lottery, it would be conducted publicly, with full coverage by the media. Accredited observers from public interest groups will have full access to observe the proceedings. 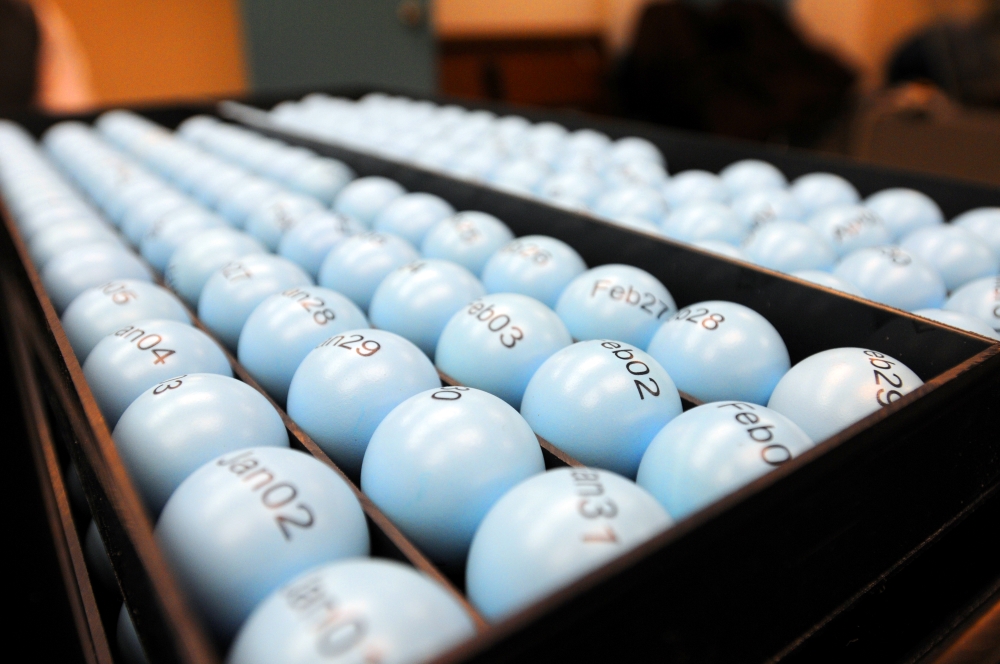 The lottery process begins with two large air lottery drawing machines. First, 365 (366 for men born in a leap year) balls having both a date and a month on each of them are loaded in one of the machines.  Second, balls with a number from 1 to 365 (366 for men born in a leap year) on each are loaded into the second machine. Official observers certify that all air mix balls were loaded in the Titan lottery drawing machines. This is done in full view of all observers, officials, and the media.

For example, if the date August 4 is drawn first from the “date” machine, and the sequence number of 32 is drawn from the “numbers” machine at the same time, then those men turning 20 on August 4 would be ordered for induction processing only after men whose birthdays drew sequence numbers 1-31. The drawings continue until all 365 (or 366) birthdays of the year are paired with a sequence number.

After the lottery is completed and results are certified, the sequence of call is transmitted to the Selective Service System’s Data Management Center. Almost immediately, the first induction notices are prepared and sent via the U.S. Postal Service to men whose birth dates drew the lowest lottery numbers, starting with sequence number 1. The number of sequence numbers called for induction processing is based on the quota for personnel given by the Department of Defense.

This system, based on random selection of birth dates, with the order of priority for reporting assigned in a random manner, is a fair and equitable method of calling men to serve.