“The Selective Service System provides an additional tier of support to our Nation’s all-volunteer military in the event of a national emergency and factors into the Department of Defense’s efforts to maintain military readiness. It is an honor and privilege to serve as Colorado State Director and support this mission by ensuring that we can rapidly mobilize operations across the state in response to a national emergency,” BG (Ret.) Capozzella said.

BG (Ret.) Capozzella began her 27-year military career in the U.S. Army and was stationed at Ft. Carson, CO and also served in the Army Reserve and the Colorado Army National Guard. She went on to become the first female BG in the Colorado Army National Guard before retiring in 2014. BG (Ret.) Capozzella built a distinguished career in the civilian sector, working in the finance industry. She is an active community leader serving as Secretary of the Pikes Peak Rotary Club and board member for the Sachs Foundation.

Mr. Kett said, “General Capozzella served her country in the U.S. Army, Army Reserve and Colorado Army National Guard with honor and distinction; built a successful private sector career; and through volunteerism, is making a difference in the lives of so many in her community. She’s the right person for the job and will lead our efforts in Colorado to strengthen our readiness capabilities in coordination with State, county and local leaders.”

BG (Ret.) Capozzella earned her bachelor’s degree from St. Lawrence University in Canton, NY and her master’s degree in Strategic Military Studies from the Army War College in Carlisle, PA. She lives in Colorado Springs with her husband, Rob Utter and their three children, Nate, Alex and Lauren. 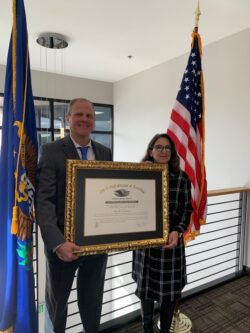